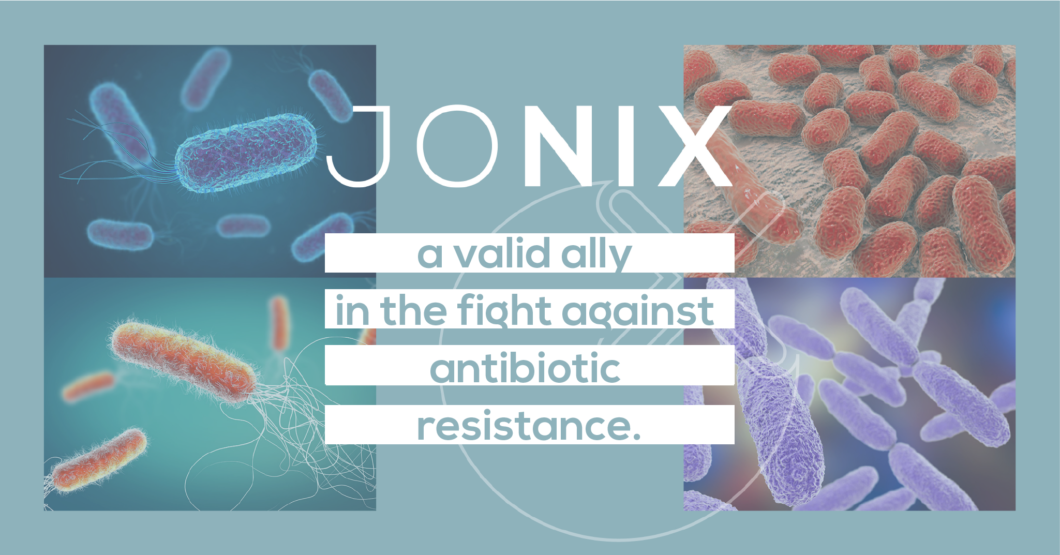 Multidrug-resistant bacteria are a devious threat that is rarely talked about in the media, yet they have a major impact on everyone’s health and public health.

Infections caused by multidrug-resistant bacteria, in fact, are not curable by the antibiotics that are usually prescribed because they have developed a form of resistance to them. They thus become extremely dangerous, all the more so because they attack fragile people, due to illness, hospitalisations, age, chronic diseases. Therefore, identifying a system that blocks the proliferation of this type of bacteria and prevents its spread is becoming increasingly more urgent, as is the increase in this type of infections. The Department of Molecular Medicine of Padua has tested the Jonix devices on this type of bacteria, demonstrating their effectiveness and usefulness as a prevention tool.

JONIX NTP TECHNOLOGY breaks down bacterial load and is also effective on multidrug-resistant bacteria: this is demonstrated by the experimentation conducted by the Molecular Medicine Department of Molecular Biology in the University of Padua. This further demonstration of the properties of the specific patented non-thermal plasma technology Jonix opens important perspectives in “strategies aimed at reducing the risk of transmission of infections in a healthcare setting or in other areas with a high body mass and promotes Jonix NTP as a technology capable of making a contribution to the reduction of infections.

The healthcare, veterinary and other areas with a high body mass will be able to find in Jonix devices a valid ally in the important fight against antibiotic resistance.

In Italy alone, there are 1,000 hospitals, 9,000 clinics, 10,000 residential structures, 1,100 rehabilitation centres and other 5,600 health facilities of various types, which could benefit in terms of hygiene, health and activities, thanks to our technology capable of breaking down multi-resistant bacteria.

Multidrug-resistant bacteria are one of the main public health urgencies worldwide, because they involve numerous and serious problems in the prevention and treatment of diseases.

According to the article Antimicrobial Resistance: Implications and Costs, the abuse of antibacterial agents in health, agriculture and livestock is causing an increase in antimicrobial resistance, along with the spontaneous evolution and mutation of bacteria. Many studies have shown the disastrous financial consequences of multidrug-resistant bacteria, including extremely high healthcare costs due to increased hospitalisations and the need for drugs.

The antimicrobial resistance developed by multidrug-resistant bacteria (AMR) occurs when microorganisms such as bacteria, viruses, fungi and parasites are able to survive, reproduce and thrive even in the presence of drugs that previously were able to contain them and inactivate them. This means that more and more bacterial infectious diseases cannot be cured with antibiotics. In addition, infection from antibiotic-resistant bacteria leads to serious illnesses and prolonged hospital stays, increases in healthcare costs, higher costs for second-line drugs and a very high risk of therapeutic failures. For example, in Europe alone, it has been estimated that antimicrobial resistance has been linked to more than € 9 billion ($ 10.5 billion, £ 7.6 billion) in additional healthcare bills per year.

The consequences of the increase in multidrug-resistant bacteria

Resistance to antibiotics compromises the ability of the human immune system to fight infectious diseases and leads to complications in the most fragile patients undergoing chemotherapy, dialysis, in delicate post-operative situations. People with chronic conditions such as diabetes, asthma, and rheumatoid arthritis can also be severely affected by antibiotic resistance.

As the presence of multidrug-resistant bacteria increases, the number of effective antibiotics decreases and doctors will increasingly be forced to use classes of drugs such as carbapenems and polymyxins, which have a high cost and many side effects, as well as not being readily available in the poorest countries.

One of the best-known cases of multidrug-resistant bacteria is Staphylococcus aureus methicillin resistance (MRSA), which is associated with high annual mortality rates worldwide. Additionally, multidrug-resistant gram-negative bacteria (MDR-GNB) have made treating several infections such as pneumonia and urinary tract infections more challenging. Even infectious diseases that in many countries have been eradicated thanks to vaccines and antibiotics are reappearing in the most impoverished countries and are proving to be increasingly resistant to the drugs used up to now: cases of tuberculosis, gonorrhoea and typhoid fever increase every year and contribute substantially to people’s health and the high cost of the health systems around the world.

It becomes immediately obvious, therefore, that having systems such as Jonix Non-Thermal Plasma Technology available, capable of controlling the multidrug-resistant bacterial proliferation and making health care environments and instruments safe, is essential to guarantee health systems to respond adequately, to prevent and decrease hospitalisations and related expenses.