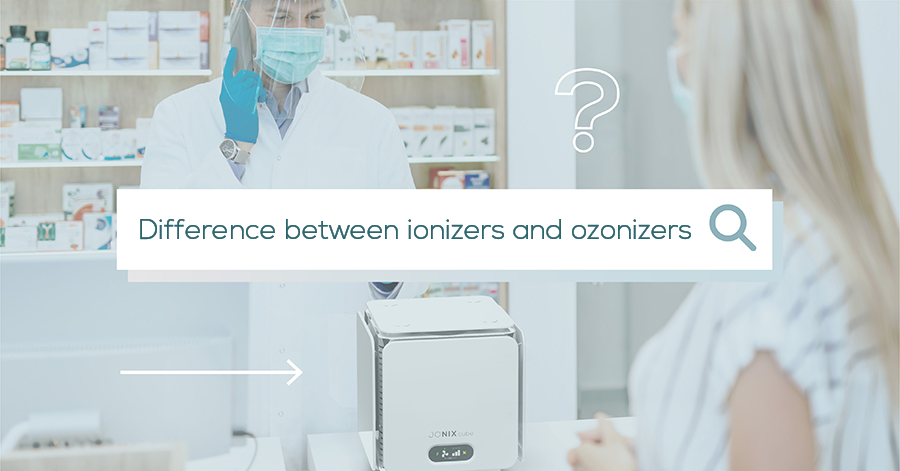 One of the questions we are asked most often is whether our sanitising devices use, produce or release ozone. The question is actually legitimate and also arises from a confusion between sanitisation technologies such as ionization and ozonation, which are very different from each other in terms of “raw material”, effects, consequences and use.

Ozone is a gas composed of 3 oxygen atoms. In explanation, the normal molecules of oxygen (O2), of the type we breathe, instead, have two oxygen atoms. This third atom makes ozone highly unstable, very prone to chemically react with other substances and, in certain concentrations, capable of breaking down microorganisms and particular odours. Ozone decomposes spontaneously in the presence of oxidizable materials, moisture and solid surfaces.

Ozone occurs naturally in the atmosphere: it forms in the stratosphere when, due to sunlight, oxygen molecules (O2) break down and reform as ozone molecules (O3).

Commonly called “good ozone,” stratosphere ozone protects people, trees, crops, property and microorganisms from the harmful effects of ultraviolet sunlight. However, this beneficial ozone has been partially destroyed by man-made chemicals, causing what is called an “ozone hole”.

Ozone at ground level, instead, is generated by chemical reactions between nitrogen oxides (NOx) and volatile organic compounds (VOC). This happens when pollutants emitted from cars, power plants, industrial boilers, refineries, chemical plants and other sources react chemically in the presence of sunlight. Ozone is more likely to reach unhealthy levels on hot sunny days in urban environments, but it can still be present during the colder months. The pollution by ozone in the air, when in high concentrations, is detrimental to the health of people and the ecosystem in general, causing breathing and lung problems, damaging sensitive vegetation during the growing season.

Difference between ionizers and ozonizers

Ozonizers are machines built to exclusively produce ozone to exploit its oxidative capacity to decontaminate the environments. It is important to know that, in order to eliminate microorganisms and be effective, ozone must be in a concentration that is also harmful to human health.

The sanitisation of the workplace through ozone must take place in the absence of people, using a dose and a service life sufficient to kill microorganisms and viruses, but with minimum effects of deterioration on materials. It is in fact known that environmental concentrations of ozone acceptable for human health may not be sufficiently effective as sanitisers (Source: Professional use of ozone also with reference to COVID-19 – ISS-INAIL Working Group)

For this reason, ozonizers at high concentrations cannot be switched on continuously and in the presence of people.

Devices that use Jonix Non-Thermal Plasma technology exploit an advanced form of ionization to decontaminate the air and surfaces. Ionization is a natural air purification system that occurs in particular atmospheric conditions, such as during a storm. In these cases, the electric discharge of lightning releases electrically charged particles: electrons, ions, atoms and molecules which, colliding with each other, produce oxidizing species capable of attacking and dissolving the pollutants present in the air. In Jonix devices, sanitisation takes place through Non-Thermal Plasma: by means of appropriate patented actuators, cold plasma is generated, that is plasma at room temperature (very different from what occurs for example on the sun, which is instead a thermal plasma). This cold plasma ionizes the air that comes into contact with the actuators: the molecules that make up the air are thus “activated” because they are “fragmented” into reactive species (electrons, radical species, ions, etc.); these reactive species produce numerous chemical and physical processes including the oxidation and disintegration of polluting molecules and microorganisms dispersed in the air and on surfaces.

The evolvedionization of Jonix devices is a sanitisation system that, unlike ozonation, can be used in a continuous and prolonged manner, in the presence of people, without side effects, following the directions of optimal dimensioning of the device. Through Jonix Non-Thermal Plasma the environments (air and surfaces) are continuously decontaminated, even during the presence and passage of people.

JONIX devices, as we have just seen, use Non-Thermal Plasma technology to generate oxidizing reactive species, which have the function of sanitising and decontaminating air and surfaces.

JONIX has developed 3 patents to protect the specific features of its Non-Thermal Plasma generators: in fact, these are elements that use voltages and frequencies such as to minimize the production of ozone. Compared to ozonizers, which are designed and managed with geometries and electrical power supplies to maximize ozone production, Jonix generators instead pursue the opposite objective, namely to limit the concentration of ozone compared to other species. For Jonix devices, ozone production is therefore a secondary aspect, deliberately limited to the minimum and always far below the parameters indicated in the legislation (50 ppb – WHO 2005 & standard IEC 60335-2-65).

Furthermore, as for any device that you want to use to sanitise or kill biological or chemical species, the sizing and the time of use is important concerning the volumes to be treated and the polluting charges.
In short: JONIX devices, if correctly positioned and sized with respect to the volumes of the room to be treated, allow to have ozone concentrations in the environment below the strictest limits recommended by international guidelines.