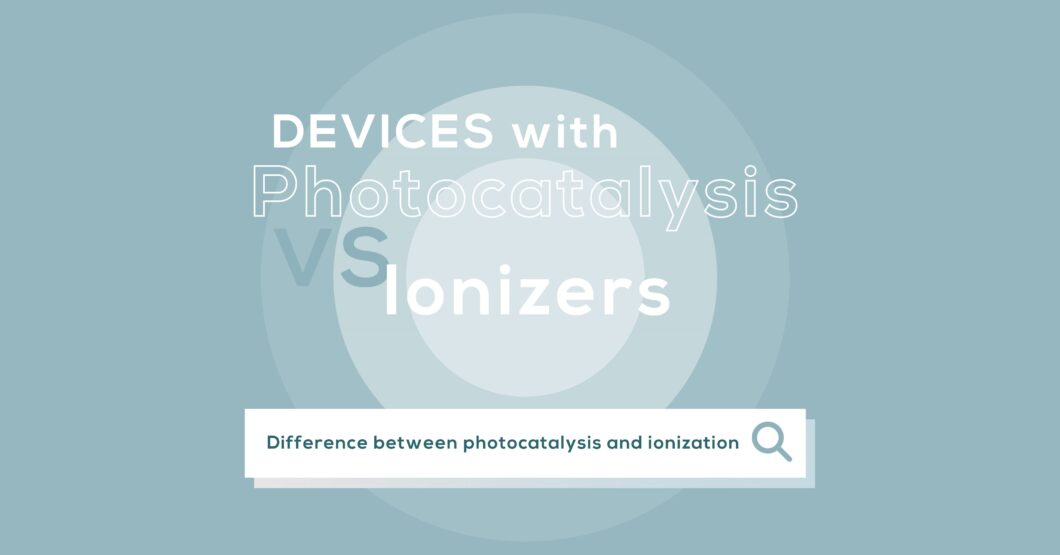 What is the difference between a device that uses photocatalysis as a technology and one that, instead, is based on an advanced ionization system (Non-Thermal Plasma)? Both devices aim to eliminate viruses, bacteria and other pollutants from the air and surfaces, but they do it in a different way and with different results.

What you can find in this article:

Photocatalytic devices what they do and how they work

Photocatalysis is a technology that facilitates certain processes such as the oxidation of pollutants in the air. The process is activated in the presence of a photo-catalyst, which is a substance capable of activating a chemical reaction by absorbing electromagnetic radiation (light). In other words, to have a photocatalysis process you need an activating substance and a source of light, natural or artificial. The most common photocatalyst is Titanium Dioxide (TiO2) which, when irradiated with UV radiation, when it comes into contact with oxygen-containing molecules (e.g., O2, H2o) can, in turn, generate reactive oxidizing agents (such as the OH radical) which are able to transform polluting organic substances into carbon dioxide and water.

The devices that sanitize the air through photocatalysis generally consist of a photocatalytic system powered by a UVC lamp (light source) and are often also equipped with filter sections. Thanks to the oxidizing species that can form on the surface of the titanium dioxide subjected to ultraviolet light, the membranes of viruses and bacteria can be attacked by inhibiting their activity. Any mineral filter present supports the TiO2 filter to ensure maximum efficiency in the purification of microbial agents and odours.

The main limitations of devices based on photocatalysis are due to some factors that distinguish this technology, which in itself is the union of 2 technologies (UV + photocatalytic substances):

Non-Thermal Plasma devices: what they do and how they work

Jonix devices use an advanced form of ionization , Jonix Non-Thermal Plasma Technology. The technology is safe and effective for the decomposition of pollutants and the sanitization of environments and surfaces. The heart of Jonix devices is the Non-Thermal Plasma generator, whose architecture and system are covered by patents that make our technology unique and not replicable in terms of efficiency and effectiveness.

The non-thermal ionization process is a physical phenomenon generated at room temperature that uses air as a gaseous mixture transforming it into an ionized gas made up of various electrically charged particles: electrons, ions, atoms and molecules.

These loaded species, in the presence of oxygen, are called ROS (Reactive Oxygen Species) and are capable of attacking a large variety of polluting compounds, oxidizing and breaking them down.

The benefits of Jonix Non-Thermal Plasma